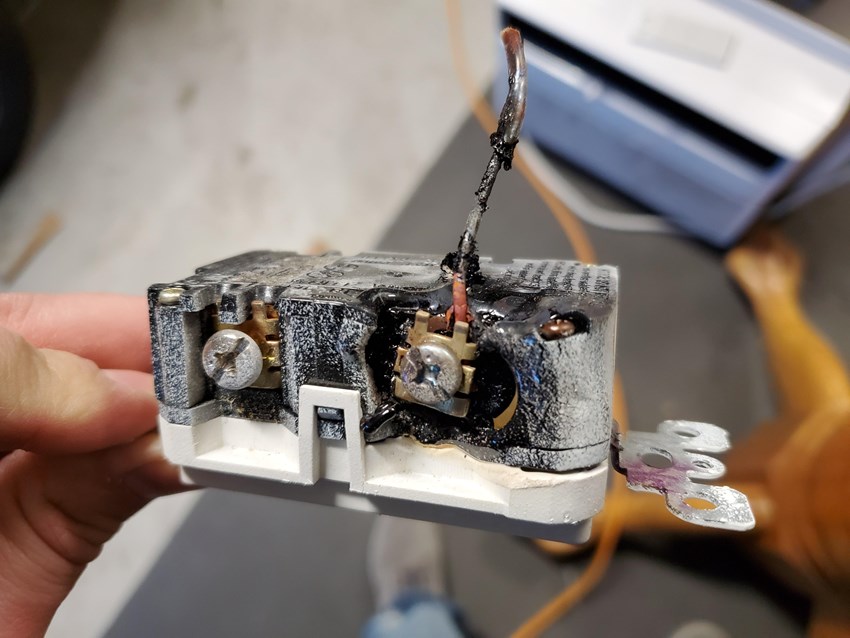 Arcing is a phenomenon that can occur at loose electrical connections. This can be at wire splices, at circuit breaker connections, wall switches, receptacles, or within an appliance. Arcing is caused by voltage and a physical space. The higher the voltage, the larger the physical space that the arc can reach. Lightning is a perfect example of arcing. Lightning can contain 100,000’s of Volts and can easily reach many miles between clouds or between clouds and the Earth. Arcing can be good as well, such as at the end of a spark plug. The concern with arcing, when it occurs in undesirable places, is because it can potentially produce a considerable amount of heat.

The potential of arcing is why any wire junction/splice or wire termination should be properly wire-nutted and enclosed in a junction box. A properly enclosed junction box can help contain a fire plus puts the potential of shock into an area where a child’s fingers can’t reach. While inspecting homes, I often run across wiring that is simply left exposed where someone may come in contact with it. This presents a potential shock or electrocution hazard. I also often see areas of homes where someone has spliced two or more wires together and simply electrical taped the junction. Electrical tape likely won’t contain a fire should the wire splice work its way loose over time and then arc. Arcing can also occur inside an appliance or within an appliance’s power cord.

As part of a home inspection, your inspector should inspect for signs of electrical arcing at receptacles, where wiring connects to circuit breakers or fuses, etc.  This would often be in the form of black marks like in the photo below. This is specifically one important reason why all electrical splices and terminations should occur within a proper junction box or breaker panel.

Another good article you may have interest in pertains to the electrical system in an older home: https://elizabethtown.wini.com/resources/tech-articles/older-home-electrical/ 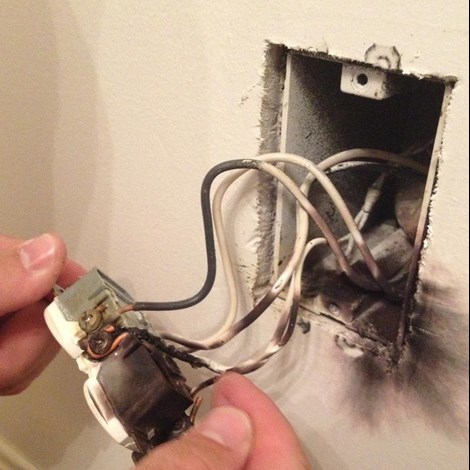 The above photo shows the result of arcing where a conductor came loose at a receptacle’s terminals hidden within a wall. Notice the one conductor’s melted insulation.

As of mid-2002, most new homes were required to have Arc Fault Circuit Interrupters (AFCIs) installed to help protect bedroom outlets. An electrical outlet is any place where electricity is tapped into, such as receptacles, switches, lighting, fixed ceiling fans, and hard-wired smoke detectors. An AFCI circuit breaker is a device that monitors the sine wave pattern of an electrical circuit’s current and voltage. Hammering a nail into a wall may inadvertently pierce wiring within the wall. This damaged wiring could then arc (unbeknownst to the home’s occupants) and start a fire. A fire could smolder within a wall for some time before anyone in the home notices or before the home is enveloped. The arc will disturb the sine wave pattern and cause the AFCI device to trip thus shutting down this circuit.

More recent changes (2009 NEC) to the electrical standards for new homes (and newly wired circuits in non-new homes) now require AFCI protection in most of the home’s 120 volt circuits, no longer just those that serve bedrooms.

I’ve run across a few AFCI devices in my home inspection travels that either didn’t trip when tested or the AFCI device exploded. Either result indicates a faulty AFCI device that should be professionally replaced.

AFCI devices can be added to many modern breaker panels to provide arcing/fire protection in the home. Ordinary circuit breakers normally would only trip due to an over-current situation (such as a short circuit from a parallel fault). Some electricians suggest adding AFCI devices to homes with knob and tube (K&T) wiring (this would normally be circa 1945 and before) since this type of wiring is more likely to arc and lead to house fires due to its age. Some insurance companies will not insure homes with knob and tube wiring, although I have not heard whether any will allow AFCIs to be installed in knob and tube homes in order to provide coverage. AFCI devices are considerably more expensive than ordinary circuit breakers: approx. $40+ vs. $2.

If your home was built in the 1960s and 1970s, it may have some solid conductor aluminum wiring. This type of wiring was used in some homes during this time period due to a copper shortage. After a period of time, however, it was observed that solid conductor aluminum wiring is more likely to work its way loose at critical wire connections, such as at receptacles and switches. This can happen because wires expand and contract a small amount when power to the wiring is turned on and off. Wire terminals that were tight when the wire was energized may become loose when the power to the wiring is turned off since the wiring will slightly contract. This is less likely to happen to copper wiring, because aluminum wiring expands and contracts differently than copper. Aluminum has a higher coefficient of thermal expansion than copper.

I recommend that home owners regularly check the cords for the various moveable appliances in their homes, such as lamps, TVs, computers, and kitchen appliances. Never run wiring under carpeting/rugs or under furniture since the wiring is more likely to become damaged and may eventually arc.