I've had some Realtors and sellers declare that 'the FPE panel is working perfectly fine. There is power on inside the home!'. Just because the electric is on in the home does NOT directly mean that the breaker panel is performing its intended function. Its job is to shut off power to one or more circuits when an overload (too much electrical current is drawn on the circuit(s)). In reality, a circuit breaker isn't technically 'working' yet until it trips due to an overload. In normal everyday life, circuit breakers do not need to perform this purpose.

Since FPE circuit breakers have a well-documented fault of not tripping when they should, the only way to know if the circuit breakers are indeed 'working properly' would be to professionally test them under load and verify that the breakers trip when they should (when a specific amount of electricity passes through the breaker). Assuming that a circuit breaker panel (FPE or any brand for that matter) is working 'perfectly fine' without proper testing is an improper assumption that can have dire consequences. 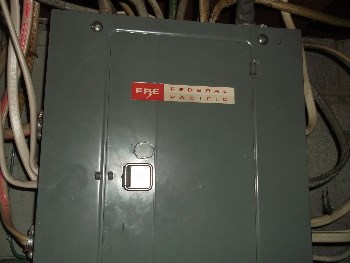 The front of an FPE breaker panel. The FPE sticker is the dead give-away.

FPE breaker panels can easily be identified by the FPE logo on the front of the panel cover (see photo above). FPE breaker handles are normally bright orange with the ON or OFF labeling.

I find FPE equipment in approx. 10% of the homes that I inspect in the Lancaster, PA area. This brand of electrical panel can be found in homes from the late 1950s up into the early 1980s. Just from that fact, this equipment is relatively old as electrical panels go and electrical panels and breakers don’t get better with age. The basic function of a circuit breaker is to shut off (aka “trip”) its electrical circuit if too much power is drawn, although the industry standard is 135% of the current load. For example, a 15 Amp circuit breaker should trip at or before its circuit draws 20 Amps (which equates to 135% of a 15 Amp load), or else the wiring connected to this circuit breaker could overheat and start a fire.

It is estimated by the IEEE (Institute of Electronics and Electrical Engineers) that approx. 1% of the average circuit breakers in use will not trip when they should. Indepth testing performed on FPE circuit breakers show their rate of failure to be much higher. Some testing has shown that 65% of FPE circuit breakers may malfunction, many of which were the 2 pole (240 Volt) variety. Test data also showed several instances of 15 Amp FPE “Stab-Lok” breakers still in the ON position and energized when their load was drawing in excess of 40 Amps! It is estimated that there are at least 54,000,000 defective Federal Pacific Electric brand circuit breakers still being used in 20 million homes in the USA today.

Some of the well-known safety issues relating to Federal Pacific Electric (FPE) panels include:

These are just a few of the known hazards with Federal Pacific Electric (FPE) equipment. The list goes on. Also, some insurance companies are finally catching on to this issue and are no longer providing coverage to homes with FPE breaker panels due to the increased fire risk.

When a company is going to manufacture an electric device for sale, they can submit the device to UL (Underwriters Laboratories) for a “listing”. Getting a UL-listing means you are going to manufacture a product to a documented specific standard. There are also unannounced onsite inspections from Underwriters Laboratories personnel to ensure UL-listed equipment is being manufactured to the specifications used for the initial UL-listing. FPE lost its UL-listing for a period of time (possibly 8+ years!) due to fraud. When UL personnel were inspecting the breaker testing procedure at the FPE plant, it later came to light that FPE plant personnel were remotely tripping breakers thereby tricking UL inspectors into thinking that the breakers were properly tripping during the testing process.

It is also known that some FPE equipment was manufactured with a fraudulent UL-listing (UL stickers were applied to equipment that didn't meet UL standards). The problem is that it is difficult to pinpoint which FPE equipment was manufactured fraudulently. Underwriters Laboratories-listed replacement after-market FPE circuit breakers are available but can be very expensive, should you need a replacement, however simply replacing one FPE breaker with another FPE breaker may only give you a false sense of security. The wiser move is a complete replacement of the FPE breaker panel with a new modern breaker panel that is UL-listed and manufactured to today’s electrical codes.

There have been changes to the National Electric Code (NEC) in past decades which now would put Federal Pacific Electric breaker panels in violation. Home inspectors do not typically get involved in building and electrical codes (since we are not certified code enforcement officials), however, the responsible home inspector needs to have a good working knowledge of the various codes.

Most electricians that I have talked to on the topic agree that Federal Pacific Equipment needs to be closely evaluated, minimally, yet most recommend replacing FPE equipment. Most electrical professionals outright call Federal Pacific Electric equipment “junk” and many home inspectors and those in the electrical industry say that "FPE" actually means "Failure Prone Electric".

My clients often ask me 'so why didn't the CPSC require a recall?'. It had to do with money. The Consumer Product Safety Commission's (CPSC) budget in the early 1980s (when FPE issues first came to light) was low and they simply couldn't afford to put resources into their own 'official' testing of FPE equipment. This undoubtedly left millions of American home owners at risk.

There are still stories being told of modern day fires (some even in recent years locally) being caused by Federal Pacific Electric equipment not providing the protection that breaker panels should be designed to offer and that a home owner expects. In 2005, the State of New Jersey passed a class action lawsuit regarding FPE breaker panels.

What should a home inspector do?

When the prudent home inspector runs across Federal Pacific Electric equipment during a home inspection, the inspector should report the panel's presence and discuss the known history and known hazards of FPE equipment with his client. While not all FPE equipment is a 'fire waiting to happen', there has been considerable data obtained from past research that warrants a closer look. When I personally run across Federal Pacific Electric equipment, I strongly recommend that my clients consult a qualified electrician familiar with FPE breaker panels to thoroughly evaluate the breaker panel and make recommendations. Determining whether arcing has occurred behind the FPE breakers or testing circuit breakers under load can often only be determined by removing all of the circuit breakers. This task should only be done by a qualified electrician.

I would like to thank the following for providing some great resources and data for this article: