Since fuel oil and LP (Liquefied Petroleum) are both flammable (under the right conditions), care must be taken when a home has fuel stored, whether above ground or underground. A fuel spill or leak can lead to an expensive environmental concern and extensive cleanup as well as a fire hazard and damaging any stored items in the vicinity. The liability involved with a leaking tank or fuel spill can be extremely high and can cause years or decades of financial punishment.

Although most residential fuel tanks are outside the regulatory realm of federal law, if a leak or spill occurs, the owner of the fuel tank may still be liable under local/state regulations. The source of the spill needs to be remedied, an environmental analysis is performed, cleanup occurs, and a report is submitted to the local authorities.

If a fuel oil tank is installed in a basement or crawl space, many jurisdictions require a minimum distance of 5’ or 10’ between the fuel tank and the oil burner. Also, the fuel line between the tank and oil burning appliances should either be buried in the basement floor or run along the basement perimeter wall to prevent it from being a trip hazard. Having a functioning fire extinguisher installed nearby any fuel oil tank or oil burning appliance, such as a furnace or boiler, is a prudent move.

Since a home inspection is a visual non-invasive examination, the inspection of the fuel tank system is also non-invasive when performed by the home inspector. A visual inspection of the tank and plumbing to the oil burning appliance is recommended monthly by the home owner as well. Look for oil leaks from the tank, fuel fill supply line, the oil filter, or the fuel line itself. Make sure not to store things on the fuel line, if exposed, since it could be punctured causing a leak.

The home inspector will also look for signs of excessive rust or oil stains on the tank or the floor beneath it. A home inspector may also look for evidence that a repair was made, such as a patch repair to the tank, although this may easily be hidden out of view. A standard 275-gallon fuel oil tank fully-filled can weigh about a ton (2,000 lbs). It needs proper support under the tank and should be on solid ground. Anything less may allow for the tank to potentially tip over. Some LP tanks are the 'skinny' cylinder-type and simply sit on the ground; this type should be properly secured to the home with straps, for example, to ensure they can't be tipped over.

Also, if the fuel oil tank is located in a garage where a vehicle could possibly strike the tank, special care needs to be taken. A solid rigid column (a bollard), for example, can be installed in front of the tank to prevent a vehicle strike. 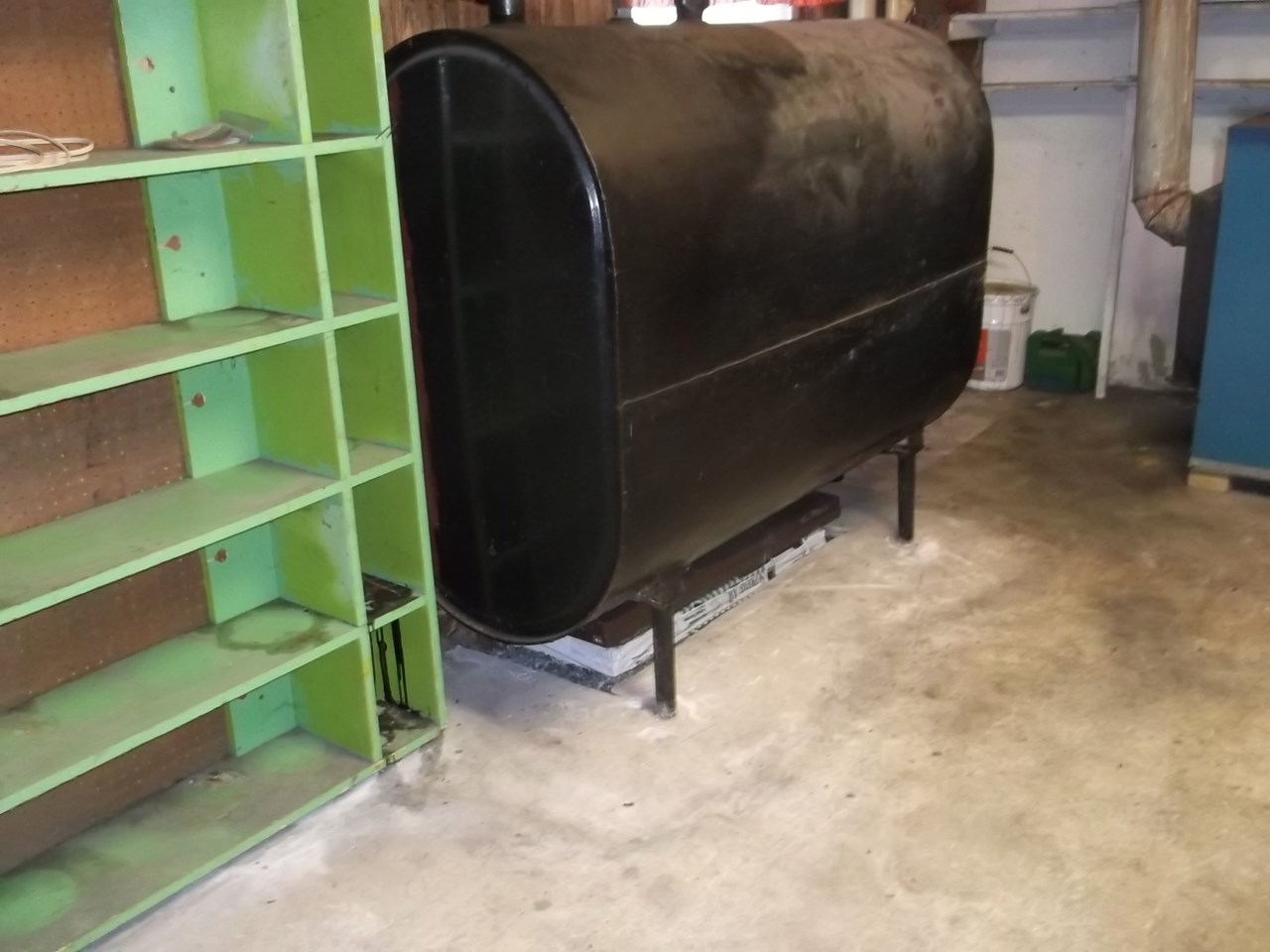 The above fuel oil tank is in garage where it could be struck by a car or truck.
A bollard, for example, should be installed to prevent a vehicle from striking the tank.

This fuel line comes from a nearby LP tank, however the fuel line is not properly
bracketed to the home. It hangs loosely and can easily be pulled on, such as by a small child.
The LP supplier or a licensed plumber should be contacted for repair.

Although, the exact amount of oil in the tank is often not visible, most above-ground tanks have some sort of sight gauge on top indicating the approximate amount of oil remaining in the tank. It may be the bobber type or a rotary dial type. It’s important to not let the oil level run below 6” since rust, sludge, and other debris tends to float on top of the oil and, as the fuel level gets low, this ‘junk’ can get into the fuel line shutting down the boiler or furnace. At this point, an HVAC professional or licensed plumber will need to be called in for service and possibly the fuel line may need to be replaced if clogged.

As a preventive measure, signing up for an auto-fill program with a local heating oil supply company can help prevent this issue since they will normally monitor usage over a period of time and automatically refill the tank before it gets too low. Most fuel oil tanks have two pipes, a fill pipe and a vent. A vent alarm (such as a whistle) will tell the fuel supply delivery technician when the tank is full. The vent alarm should be installed for both visible and underground tanks.

What looks like a simple coffee or soup can thrown in the yard could actually be covering a fill pipe for an underground fuel tank. If you see pipes sticking out of the ground or through the basement wall or floor, these pipes could lead to an underground fuel storage tank, also called a UST. Underground oil tanks can be another beast in themselves. Since they’re out of sight, they are often out of mind, as the saying goes.

Before purchasing a home, it is wise to ask the seller if there is or has been an underground storage tank on the property. This could contain or have contained things like fuel oil, kerosene, propane, or gasoline. There could be serious environmental concerns and a large expense to either remove the tank, address a leak, and/or correct a collapsed/corroded fuel tank. Even if the tank has no leaks, simply filling the tank could have caused a small spill that can impact the ground it, or a nearby stream or pond, or even a well system serving this property or another.

If you see a sunken area in the yard, this could be a sign of a collapsed tank. If a tank is still present, it can collapse under the weight of the earth around it. Even if there is fuel in the tank and it never leaked in the past, any collapse could allow for such a leak.

An unused tank can be officially decommissioned. Contact your city, township or borough at this point. Decommissioning normally entails removal of any remaining fuel oil, then a filler material (similar to cat litter) is poured in to soak up the remaining fuel. After this filler and any remaining fuel are removed, an inert material such as concrete or sand is poured in to fill the tank. Otherwise, this void (the now empty tank) can later collapse. The tank can also be removed from the ground.

If you see a terminated fuel line in the basement but no tank, this may indicate either a basement tank that was removed or an underground tank that may or may not still be present. Question the seller regarding a past or present fuel tank on the property. Getting answers to this question prior to closing is critical and can save money and heartache down the road.

Removing or permanently capping the fill and vent pipes is also critical for an inactive underground tank or basement tank. Many of us have heard stories of tanks that have been removed, but the fill and vent pipes were left in the basement wall. The fuel oil delivery man gets the delivery address wrong and starts filling the basement of the house that no longer has a tank. Messy and expensive cleanup indeed! This instance has been in the local news several times in the past few years.

The typical life expectancy of a buried underground storage tank may only be in the 5~10 year range, although this can vary depending upon the type of tank, the type of soil, amount of water the area gets, etc. A fuel oil tank in a dry basement should last much longer (30+ years). Due to rain water or condensation, tanks should be tested for water at the bottom of the tank. If water is present but not removed, it can lead to rust or corrosion of the tank, as well as getting into the fuel line adversely affecting the appliance (furnace, boiler, or water heater) trying to burn the fuel oil. Additives can be used to help remove water. It is often this water that will lead to rust and then leaks. Improper tank plumbing can also lead to leaks.

There are environmental companies that can test underground storage tanks and perform soil analysis. Complex electronic gear can be used for this analysis. Some fuel oil companies can also perform this task and can even test for water in the tank and remove it, if found.

If a well is present near a fuel storage tank, or where a tank may have been previously located, it would also be wise to test the water. The basic total coliform and nitrates test won’t help out here! Special analysis is needed to test for contaminants, like fuel oil or gasoline, in water. A ‘UST Volatiles’ test can be done. If an older gasoline tank existed which may have contained leaded gasoline, a lead test should be performed as well.

Whether you are the agent representing the buyer or seller, it is always a good idea to do a little detective work when walking around the home. A terminated fuel oil line, a pipe to nowhere, or sunken ground can all be indications of a fuel storage tank. Asking the proper questions, obtaining the correct answers, and verifying proper removal or decommissioning of an unused tank can save a handful of headaches and expenses down the road.