Improper Notching And Boring Of Joists

Structural framing is the bones of a home. It normally consists of wood joists, studs, and rafters and/or trusses.  Its function is to distribute the weight load of the building through the home and then into the foundation and ground around the home.  The weight load includes everything in the home such as the framing, people, furniture, etc., as well as snow on the roof.

Not to throw electricians, plumbers, HVAC professionals, and other contractors under the bus, but these are the trades who most often damage wood structure to run something like pipes, ducts, or wiring through the wood from one place to another.  When done in an approved proper way, things work as designed and the home's structural system is stable.  When a hole or notch is cut improperly into the framing, it can weaken the structure and sometimes put the structure at risk of failure which can be catastrophic.

The most commonly seen location of this damage is in the basement when inspecting the main level's floor joists.  The structural framing helps spread out the weight load of the home and disperses the weight via the wood framing to the foundation.  The top edges of floor joists are in compression (a squeezing-together force) by supporting what's above them, whereas the bottom edges of the joists are in tension (a pulling-apart force).

When the joists are damaged because of improper holes or notches drilled into them, the system can become unstable since the joists can't work as designed and may fail.  A failed joist may, minimally, lead to a sagging floor or, in extreme cases, the collapse of a home.  A hole is often a round or square opening fully contained on all 4 sides within a joist.  A notch is generally a 3 sided cut in the joist where the 4th side is open at the top, bottom, or end of the joist.  How many times have we been in a basement and looked up underneath a bathroom and to see the toilet's 4" drain pipe land right where a floor joist exists?  See the photo below for an example.  The plumber often gets out his saw and simply removes the wood structure that is in his way.  If you were to cut half of the depth out of your thigh bone (femur), you'd weaken your body's ability to carry your own weight and you may fall down. 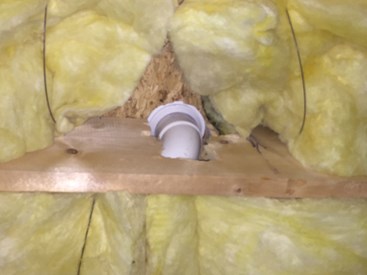 This is an improperly notched floor joist for running a drain pipe. 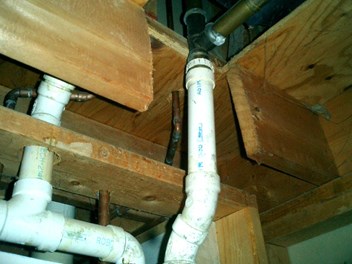 Even if no damage (such as sagging floors, sticking windows or doors, or cracks in wall coverings) is currently visible due to the improper notching or boring in the structure, repair is likely needed as it is unknown what may happen in the future.  When someone new moves into a home, their distribution of furniture and other weight may be different than how the structure settled in prior decades.  This new weight distribution pattern may be enough for the prior joist damage to now show itself in an adverse way in the form of new wall cracks or sagging floors or worse.

In many cases, sistering can be done to the affected joist(s).  Sistering entails installing new properly sized lumber alongside the damaged lumber and then through-bolting on both lateral sides of the damaged section of the original joist.  This allows the sistered lumber to help transfer weight load across the damaged area of the original joist via the newer lumber.  Nailing is not the proper way of attaching the sistered joist to the original damaged joist; proper through-bolts is the proper method.  The bolting should exist on both sides of the damaged area of the joist.  This is the same type of repair often done to address prior insect damage to a structural joist.  In some cases, additional perpendicular framing below the joists (such as with 4x4 lumber) and one or more support posts to the basement floor may also be needed for additional load distribution.  Along with the structural repair, whatever is running through the hole or notch (most often either a pipe, wiring, or ductwork) will likely need to be rerouted around the repaired area.

Building standards state how and where holes and notches may exist in solid wood structural joists.  Generally, holes should exist only along the neutral axis of the joist:

The below graphic (courtesy of The Journal of Light Construction) shows what sizing and where holes and notches may exist in structural joists. 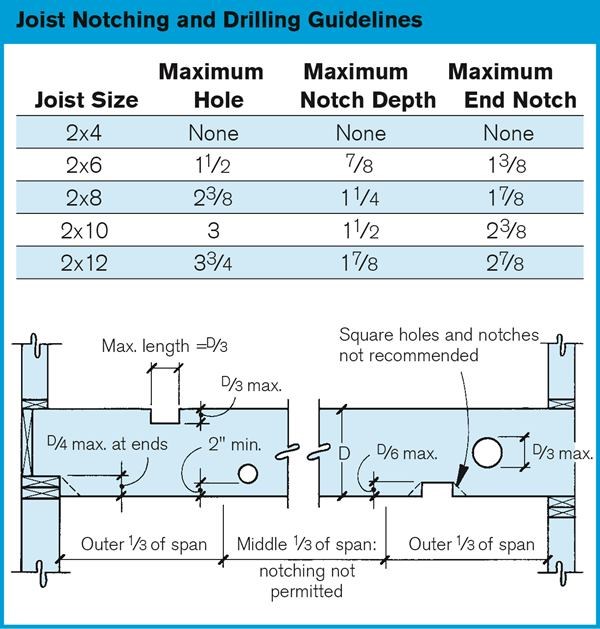 Floor trusses are engineered complex webs of wood structure (similar to roof trusses) and should not be modified in any way without approval by the truss designer/manufacturer.  Running plumbing, wiring, and ductwork through floor trusses is normally not an issue since there are generally large enough openings within the truss between the wooden members.

When walking around a home, it is a good idea to pay close attention to sagging or springy floors, windows and doors that stick in their openings, and excessive cracks in wall or ceiling coverings.  Each may indicate that one or more structural components may have been damaged and is failing (or has already failed).  If visual damage is evident, some lenders or insurance companies will require a structural certification letter stating whether or not the damage has compromised the building.  In most cases, home inspectors are not licensed structural engineers and can not provide legal structural certifications even though we get asked for them all of the time.  Overall, home inspectors should not even comment on the 'structural adequacy' of a home unless specifically qualified, insured, and trained to do so and are licensed by the Commonwealth of PA.  A structural certification letter should be provided on the licensed engineer's letterhead and will include the engineer's Commonwealth of PA license number. Part 3, subsection A of the ASHI (American Society of Home Inspectors) Code Of Ethics specifically states that:

"Inspectors shall avoid activities that may harm the public, discredit themselves, or reduce public confidence in the profession. Part (a). Advertising, marketing, and promotion of inspectors' services or qualifications shall not be fraudulent, false, deceptive, or misleading

You may also be interested in a related structural article called Permanent vs. Temporary Support Posts