One safety item I find to be missing in most homes I inspect is the kitchen stove’s anti-tip bracket. Anti-tip brackets have been required by Underwriter Laboratories (UL) and the American National Standards Institute (ANSI) for all free-standing stoves/ovens manufactured after 1991. From my experience inspecting homes since 2002, over 90% of kitchen stoves lack this critical safety feature (sometimes even in brand new construction!). Some manufacturers have incorporated anti-tip brackets into their stove designs since well before 1991. All self-standing stoves (ones that are not built-in to a wall or counter) manufactured since 1991 are required to be supplied with an anti-tip bracket and, of course, the appliance installer should install the bracket. This almost never gets done.

An anti-tip bracket is an “L” shaped piece of metal that should be installed at the wall/floor joint behind the kitchen stove. Modern stoves have a small groove or opening built into them so that they can slide into place over the bracket. The groove or opening can be located on the right or left of the stove’s rear side (depending upon the stove’s manufacturer and model). The bracket allows the stove to be slid out for cleaning or inspection behind the stove, yet prevents the appliance from tipping out away from the wall. If the stove is gas and it can freely tip out, besides being an injury hazard, damage to the gas line can also occur which is a separate safety issue in itself. 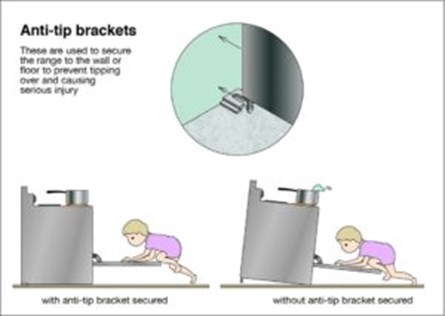 A stove can be tipped out accidentally in several ways. Simply pulling out a turkey or a child or pet putting weight on the open oven door is enough to put torque on the stove putting the tipping process in motion. This can injure adults, children, or pets nearby. Anything cooking on top of the stove will also fall forward possibly burning or scalding someone nearby. 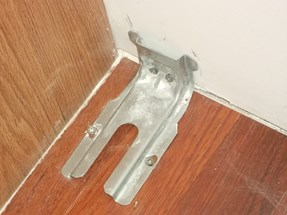 A properly installed anti-tip bracket installed behind a kitchen stove.

From my experience, most home owners and even many appliance installers don’t read the stove's installation instruction; included in these instructions details how the anti-tip bracket should be installed along with a layout template. Occasionally, I will find the brackets stored in a nearby kitchen cabinet with the stove’s manual, but in the vast majority of homes (even some new homes that I inspect), the bracket is nowhere to be found.

A major well-known department store chain was involved in multiple lawsuits several years ago and fined because their delivery crews were not installing the brackets between 2000 and 2007. Some estimates indicate that the legal settlements and fines may have cost this retailer in excess of $500 Million to provide the anti-tip brackets and their installation to their past customers (possibly 4 million homes). Amazingly, some appliance retailers still don’t install anti-tip brackets when delivering and installing new stoves.

An additional hazard exists if the kitchen’s stove is of the natural gas or LP (propane) variety. Besides the potential burn or scald hazard when a stove tips out due to the items being cooked, if a gas or LP stove tips out, this could also damage or rupture the gas/LP fuel line supplying the stove. Of course, a damaged gas or LP fuel line could present a whole other hazard!

The photo above shows a stove anti-tip bracket not installed,
but instead sitting inside the oven doing absolutely nothing.

The Standards of Practice (SoP) of the American Society of Home Inspectors (ASHI) does not require home inspectors to test for or confirm the installation of stove anti-tip brackets, however not inspecting for this critical safety feature may leave a potentially hidden hazard in a client’s kitchen. I always try to confirm the presence or absence of the bracket. Doing so only takes a few seconds. The added safety of my client and their family and pets is worth this extra few seconds of effort on my part.

To test for the presence of an anti-tip bracket, the home inspector will need to remove any stored items inside or on top of the stove/range. All of the stove/oven elements or burners should be off when this test is performed. The inspector will then gently grasp the stove’s upper rear panel and then try to tilt the oven's top forward. It normally only takes a few inches of movement to verify whether the bracket is installed or lacking. If, after 3”, the stove can still tip out, then it’s pretty clear that the bracket is missing and the test is complete. The inspector will stop at that point to prevent injury to himself or to prevent any damage to the power cord or gas/LP fuel line behind the stove. This test should only be attempted by someone strong enough to support the stove should it continue to move once the tilting process has started.

An alternate safer test for home owners is by carefully sliding out the oven's bottom drawer and use a flashlight to see if an anti-tip bracket is installed behind the unit. If there is enough space between the stove’s rear and the adjacent wall, you may be able to see a bracket installed. Just seeing the bracket, though, doesn’t necessarily mean it’s installed properly to 'catch' the stove if it were to tip out. The physical test (mentioned above) would prove whether the bracket and stove are properly installed and aligned. I have seen anti-tip brackets installed but do no align with the oven which still allows the oven to tip out unprotected.

Some stoves have only a flat cooktop (no rear upper raised panel where the dials and clock are normally located). Checking for an anti-tip bracket for this type of stove can be rather tricky since there is little to nothing to grasp and the stove would need to be carefully slid out instead of tipped out for bracket verification. For the safety of the inspector, stoves of this type may or may not be tested for anti-tip bracket confirmation. Plus, sliding out a stove can possibly damage the kitchen floor; home inspectors don’t move appliances (or any other belongings) in the course of performing the inspection. For home owners checking for the presence of an anti-tip bracket, I recommend consulting a qualified appliance professional or handyman since someone can be injured if they are not careful. According to the CPSC, there are quite a few documented cases where people have been injured or killed (most were children) due to their stove crushing them due to no anti-tip bracket. News stories about related injuries often hit the news around Thanksgiving or Christmas when people are making large meals in their ovens.

Some appliance stores have even been sued due to their delivery people not installing the anti-tip brackets and, then later, someone gets seriously injured or even killed. Some major appliance manufacturers will furnish consumers with an extra anti-tip bracket for free, should it be missing (not installed). Obtaining the stove’s model number and calling the manufacturer or one of their dealers is often all that is needed. Anti-tip brackets for many modern stoves can also be purchased from appliance stores and on the internet. Their cost is often less than $10.

For older (per-1991) kitchen stoves, anti-tip brackets may not be available, however chaining the rear of the stove to the wall is an alternate method to help prevent a stove from tipping out. This prevents easy sliding out of the stove for cleaning behind it, though.

The few seconds that it takes a home inspector to check for the presence of a stove anti-tip bracket can help protect the client’s family or pets from possible injury or death.