There are certain plumbing materials that home inspectors see everyday, and then there are some that are not used anymore and are only seen in older homes.  Whatever plumbing materials you have in your home, it’s a good idea to regularly check for leaks where the plumbing is visible, such as under the bathroom and kitchen sinks, in the basement, as well as below bathrooms and laundry rooms.  Finding a leak early is most often an easier less expensive repair with less damage caused.  It is important to know what types of plumbing materials you have in your home.  If you’re a home seller or Realtor, it is also important to know what types of supply plumbing exist in the home you are listing for the required disclosure statement.  Most homes have a combination of 2 or more of the below types of supply and drain pipe varieties.

As part of a home inspection, the home inspector should note in the report the types of visible plumbing (supply and drain) observed in the home. Keep in mind that much of the home's plumbing is hidden within walls, floors, and ceilings so only the visible portions can be inspected.

Copper is the old standard for supply plumbing in homes.  It’s been used for over 80 years and copper pipes installed in the 1920s often still work reliably today.  Their weak point, however, is most often at fittings to other pieces of pipe.  Sometimes, mineral deposits (often whitish or greenish) are visible at these areas and are often indications of a past leak that may have sealed itself up over time due to minerals in the water.  Copper pipes, in most cases, need to be soldered, although solderless connectors are available.  Up into the 1980s, lead solder was often used to mechanically connect pieces of copper pipe.  Over time, however, the lead can leach into the water supply thus contaminating it.  Newer copper pipe installs (1990s and later) use lead-free solder. 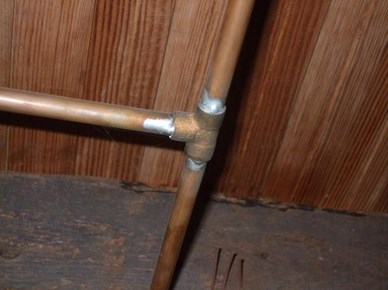 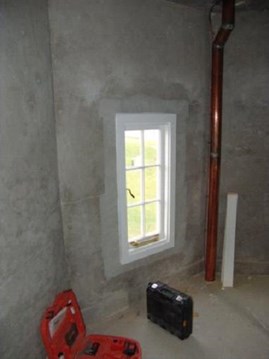 Copper is a commodity, and due to rising prices in the past several decades, copper pipe use has dropped in favor of newer less expensive plastic pipe materials that are easier to work with than copper.  Copper can also often be found installed as a waste pipe material (larger diameter than copper supply pipe) in homes built in the 1950s and 1960s.  Again, due to the rising price of copper, it was not used often after the 1960s as a drain pipe material.  Some areas also allow copper to be used for natural gas use, but must be labeled as such to prevent confusion between a water and gas pipe.

Chlorinated polyvinyl chloride (aka CPVC) has been a popular supply material for over 30 years and is often still found in new construction.  It is a type of plastic supply pipe material approved for hot water use and is primed and glued (no soldering) and is slightly bendable making it easier to work with than copper.  CPVC is typically a light yellow or off-white (creme-like) color although some orange and light blue varieties weren't uncommon in the late 1960s into the 1970s. 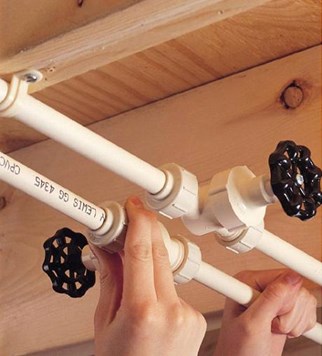 Polybutylene (aka PB) pipe was used between 1978 and 1995 and, when it came out, was supposed to be the next great plumbing supply pipe since it didn’t require any soldering and was somewhat flexible.  Crimped metal fittings were used to secure pieces of PB pipe together, although some plastic fittings became popular in the 1990s.  PB was widely used across the country.  Due to potential issues with their fittings, PB pipe sometimes has leakage issues and was taken off the market in 1995 after several very large class action lawsuits (one totaling $950M).  PB pipe was manufactured by several manufacturers, including Vanguard and Quest.   I see PB pipe in a good number of homes in the Lancaster area, although I’ve only see PB leak in one home.  To my knowledge, the class action settlement money ran out in 2009, so any future leak repair or replacement costs are left to homeowners (or their insurance company).  PB pipe will have “PB2110” stamped on it (it’s ASTM designation) and is most often grey, although other colored PB varieties were manufactured. You can learn more about Polybutylene Plumbing in this article: https://elizabethtown.wini.com/resources/tech-articles/polybutylene-plumbing/

Cross-Linked Polyethylene (PEX) became popular in the mid-1990s and is commonly found in new construction.  PEX comes in white and nearly-clear varieties although red and blue colored PEX pipe is also available for color coding hot and cold.  This material is somewhat flexible which makes installation in new homes easier than copper.  Metal fittings designed for use with PEX are used to secure it together. 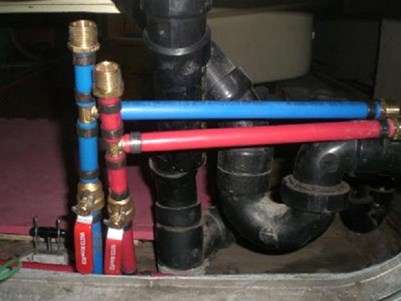 PEX comes in color-coded (blue for cold, red for hot) as
well as white and slightly off-white varieties.

Galvanized steel supply pipe was used commonly up into the 1950s and generally has about a 40 year life expectancy.  Steel pipe can rust from the inside out and, over time, often is partially obstructed like a cholesterol-filled blood vessel.  This is noticed when low flow is found within a home to one or more fixtures.  New galvanized steel supply pipe is still sometimes found in an area of plumbing that was repaired, but this is pretty rare.  Galvanized steel drain pipes were also used (larger diameter than its supply plumbing cousin) yet can also rust over time. 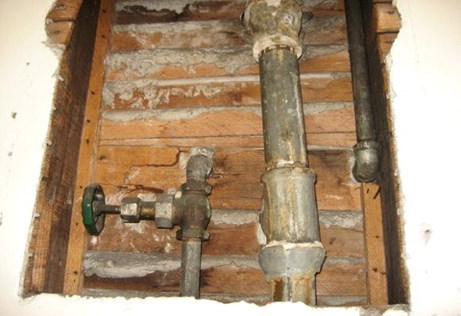 The above photo shows galvanized steel supply (left) and drain (right) piping behind a bathtub.

Polyvinyl Chloride (PVC) is the most commonly used type of drain pipe in the past 30 years.  It is used for most drain, waste, and vent (DWV) applications in modern homes.  Occasionally, I will see PVC pipe improperly installed as a water heater’s temperature and pressure (T&P) discharge pipe, yet PVC is not approved as a hot water supply pipe material and may only be used as a supply pipe for cold water.  Running hot water under pressure in PVC may damage the pipe.  Many public utilities use PVC as their underground water service pipe to the home. PVC is white in color although some varieties from the 1970s are a creme-colored (very light yellow). 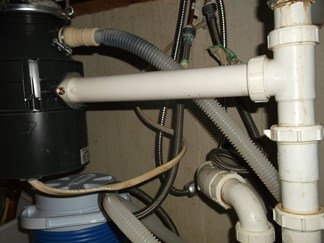 A PVC drain pipe configuration below a kitchen sink.

Acrylonitrile Butadiene Styrene (ABS) is another type of plastic pipe (typically black) used in drain, waste, and vent (DWV) applications similar to PVC.  Typically, ABS and PVC can’t be joined together unless a specific primer and cement meant for this junction is used.  ABS can be easier to work with than PVC, but is also more prone to bending if exposed to the sun.  Some plumbing codes don’t permit ABS usage. ABS tends to be more common in the western US states compared to the east coast. 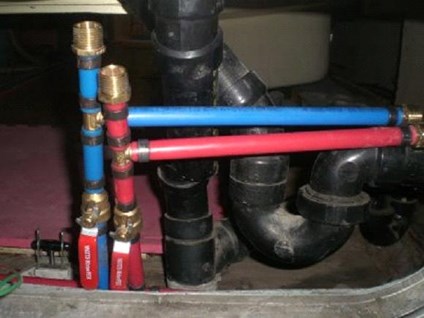 The black drain pipe in the above photo is ABS.

Stainless steel is often used as tail and trap pieces under sinks, but is not used as a whole home’s drain material.  It looks like shiny chrome, but can leak over time at plumbing traps due to the constant contact of water and steel. Stainless steel has a generally short service life due to it rusting through over time. The below photo shows a stainless steel drain pipe and trap. 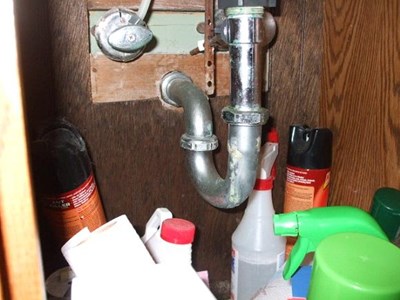 Cast iron was used as a drain pipe material about as early as plumbing was added to homes in the late 1800s.  Cast iron, however, has been used for centuries for various uses.  It is rarely seen inside homes after the 1970s.  Over time, it is prone to cracking with age and sometimes mineral deposits and sludge is seen on cast iron pipe which is normally the first clue of a crack in this material.  Tree roots commonly grow into and/or damage cast iron underground pipes. This is why, when buying any home with cast iron drain pipe, having a licensed plumber thoroughly scope the underground drain line(s) is important.  Some public water utilities still use cast iron for their underground pipes.  Cast iron is typically black colored. See the cast iron drain pipe in the photo below. 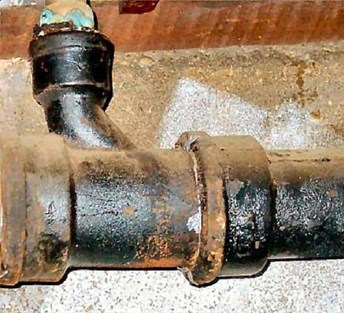 Lead was commonly used into the beginning of the 20th century.  It is so soft that it is easily scratched, even with a fingernail.  Lead is grayish in color.  It can leach into the water supply which can contaminate the water.  It is rarely seen today in older homes, as it most often has been replaced by this time.  Lead was used in drain and supply pipes. The concern with lead contamination of drinking water is related to lead supply pipes. 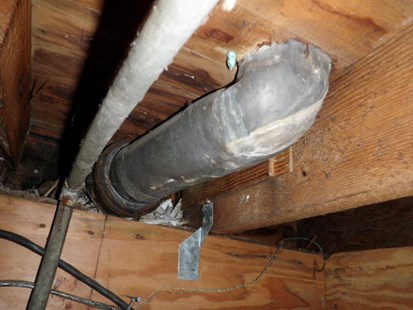 The above photo shows a lead drain pipe.

Being able to correctly determine the types of supply and drain pipe materials in a home can assist a listing or selling agent in educating their clients, as well as assist in completing the seller’s disclosure document.  I often find errors on these documents where it pertains to the home’s supply and drain pipe materials versus what I find during the home inspection.