A popular plumbing product common from 1978 to 1995 is called polybutylene pipe, commonly called “PB Pipe”. It is a plastic type of supply plumbing pipe that has been involved in several notorious and significant class action lawsuits due to breakage and leakage issues. Two of these class actions are titled ‘Cox vs. Shell Oil’ and ‘Spencer vs. Shell Oil’.

Polybutylene pipe was widely installed in the mid-Atlantic region (including the Lancaster and Harrisburg areas) as well as the deep South and Northwest US due to its ease of installation and low cost. After a short time, however, its defects became known. It is estimated that approximately 10 million homes (including mobile homes) have polybutylene pipe installed. It was sold under several brand names, such as Qest and Vanguard, although some of these companies also manufactured non-PB type plumbing pipe, such as PEX. PB and PEX are different types of pipe and should not be confused. PEX plumbing typically comes in white/clear or red and blue varieties.

The scope and standard of practice of a home inspection does not include alerting a client as to recalled products, however the prudent home inspector should still advise his client if he finds products with a well documented history of issues/problems or recalls. 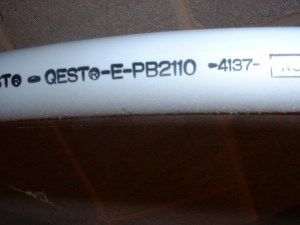 PB pipe is often grey, but also was produced in some other colors. The grey variety is most often found locally (Lancaster/Harrisburg areas). Polybutylene plumbing has “PB2110” printed on it which is its ASTM designation (see photo above). Many homes are plumbed entirely with PB pipe while others have only small amounts of it installed due to a past repair. It is certainly wise to be aware of the PB pipe issues whether you are a Realtor listing or selling homes or are a home owner with PB pipe in your home.

I occassionally find polybutylene plumbing in Lancaster area homes (approx. 3~5%). Since beginning to inspect thousands of homes in 2002, however, I have only ever seen polybutylene leak on one occasion.

The issues at hand with polybutylene are the pipe and the fittings used to connect the individual pieces of PB pipe together. Chlorine, which exists in small amounts in public water supplies, and other possible contaminants are believed to react and deteriorate the piping and its fittings. After exposure, it is believed that the pipe flakes and becomes brittle with small cracks. Leaks may occur without warning and can cause extensive damage to a home if undetected early. Plumbing leaks and the damage they can cause can be expensive to repair, including being a potential breeding ground for mold. Different varieties of fittings for polybutylene pipe have been developed; however, each appears to have some potential issues. A fitting is what is used to connect the individual pieces of pipe together. I have found little concerning any issues with the grey plastic fittings which were used near the very end of when PB pipe was still being produced.

To determine if a home may have polybutylene, look at the visually accessible supply plumbing under sinks, in the basement ceiling, at the water meter, or at the water heater. These locations are often the easiest to find supply plumbing. Just because the installed polybutylene pipe and fittings appear fine from the outside, doesn’t mean a leak may not be about to happen from the inside. Consulting a licensed plumber for evaluation of the installed polybutylene pipe is recommended. The plumber can also determine if the installed PB pipe and fittings are indeed included in one of the class actions.

Several lawsuits were filed in the 1980s and, although they admitted no wrongdoing or defects, the manufacturers of PB pipe agreed to fund various Class Action funds. One totaled $950 million!

The Cox vs. Shell Oil, et al. and Spencer class actions have now both expired.